Annarae and her family (mom Stacey; grandparents Carol and Bob) came to visit this weekend.

By the way, she had carrots for dinner the night before; thus the orange nose. 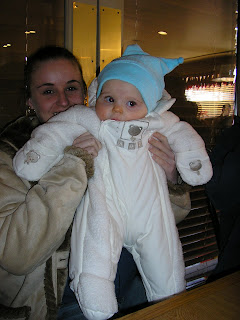 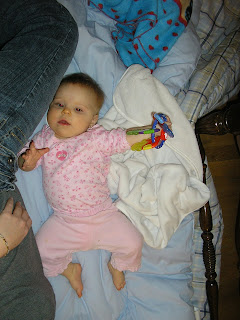 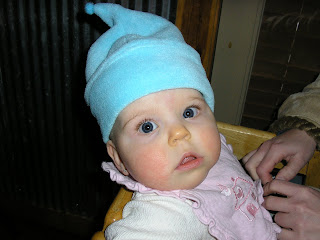 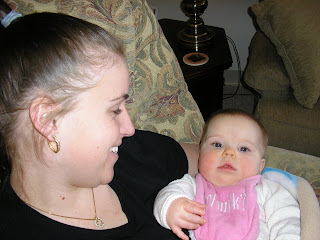 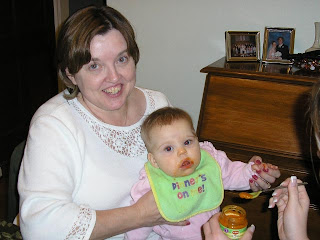 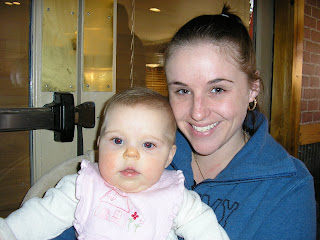 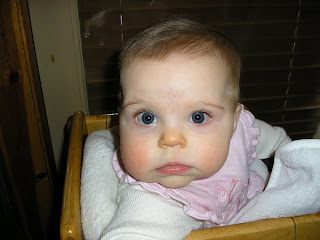 IMAGE HAS BEEN REMOVED FOR AESTHETIC REASONS.

Annarae is teething, which means everything she touches goes into her mouth. Hopefully, I uploaded this video correctly and you can see. There is no sound. This was taken with my digital camera.

And then there's this pitiful attempt to try to get her to say something. This video was taken with my cell phone.

Trying to Annarae to Talk; part 2 on Vimeo
Posted by DonnaJo at 3:37 PM 4 comments:

MEET THE PARENTS: FIRE AND ICE

A couple of weekends ago, Meghan's boyfriend, Ben, came to St. Louis to meet the family. He's from Syracuse, NY and thoughtfully brought an ice storm with him. Not the best hostess gift, but what are you going to do? 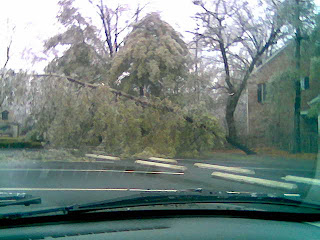 He and Meghan stayed at Meghan's dad's house for the weekend and Jenni and Tim stayed with me; after sliding into St. Louis Friday night. Jenni said they drove the entire way in the ice storm. Correction; the last half hour they travelled in a driving rainstorm. After they got here, the temperature dropped and everything froze.

The next morning, I was to host a brunch so Ben could meet my family. We had everything perfectly planned. What's that saying, Man Plans, God Laughs.

(It is important to know that twice in 2006, I was without power after storms. Once in July and I was out of power over night. The second time was the ice storm in early December when the power was out for 2 nights. I was fortunate as a number of my friends were without power for nearly a week.)

Saturday morning, I woke up around 6:00 am and had this little conversation with myself.

Me: Thank heaven I didn't lose power in the storm.

Me: How do you know you didn't lose power? Your eyes are still closed.

Me: I know because it's still warm in the house.

Me: You know you are going to have to open you eyes soon and see for sure.

Me: (sigh) (I open my eyes and look at the clock. Dark. I turn on the bedside lamp. Nothing)

Me and Me in Unison: Crap!!

Jenni got up soon after I did. She was awake at 5:30 in the morning when she heard the transformer blow and already knew the power was out. Options were discussed and it was decided we'd pack up everything and go over to her dad's for the brunch. She did call him to let him know that was happening, but he was already at a seminar he was attending that day.

We woke up Tim who happily went out to chip a Grand Prix out of a maroon block of ice. And when I say "happily", I'm lying. He really really wanted to be sleeping. Really.

As I was putting the French toast into the oven to bake, I noticed there was some debris in the bottom of the oven from a prior culinary dust-up. This was out of the norm for my ex, but I was there to cook, not judge.

I put everything back into the oven, closed the door and started making the sausage. Jenni walked into the kitchen and exclaimed at how smoky it was. Then she yelled, "FIRE!" and pointed at the oven. Through the glass in the oven door, we could see a lovely fire merrily crackling away underneath my beautiful apple-stuffed French toast.

I opened the oven door, pulled the pin, and aimed the extinguisher at the base of the flames.

Pfft. Some white foamy stuff trickled into the oven. It was like spraying an almost-empty can of whipped cream.

I shook the extinguisher and tried again. Pfft.

OK, third time. SHOOOOOOOOOOOOOOSH! Finally! Sheesh. And all of this time as the house was filling up with smoke, we heard this from the smoke detector:

Jenni ran into the kitchen and applauded my efforts. I took the French Toast out of the oven and set it on the counter. It was now covered in a white dust. I announced brunch was ruined and we'd have to go out. Jenni said the meal looked delicious. I pointed out that the topping was fire extinguisher chemicals, not powdered sugar.

As each person arrived in the kitchen, they too said the meal looked good and were also disappointed to find out the real name of the garnish.

Tim arrived with my parents, none of them knowing what had happened and coughing at the rather thick air.

They, too, marveled at how delicious the French toast looked.

I marveled at how much smoke can build up before the smoke detector would go off.

So a half hour later, we were placing our orders at a local restaurant and then we returned to the crime scene the girls' dad's house to clean up the oven. And stuff.

When we walked into the house, we noticed we didn't smell anything unusual. In fact, it smelled like someone was broiling steaks. Also, I noticed a picture Meghan had made for her dad for Christmas. She had taken a photograph of the three of them; (Dad, Meghan and Jenni), shellacked it on a tile and added text that said "Families are a gift from God; as much of a gift to them as to you. Or something like that. Meghan gave me a similar picture, only with the girls and me. And the text on mine said "Families are like fudge; sweet with a few nuts."

Jenni just looked at me and said, "I can't believe you are asking that today." 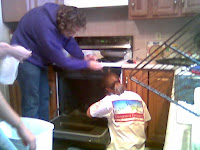 Jenni and Tim scrub away. 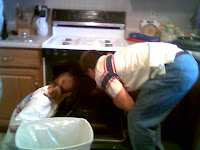 We got the oven and kitchen looking better than it did before. We discussed the fact that since the house smelled like broiling steaks; and everything looked fine, that their dad didn't need to be told that I tried to burn up his oven. But Jenni was our weak link and insisted he be told.

So I left and went back to my home where power had been restored (YAY). The girls baked some chocolate chip cookies to help fill the house with more good smells. Jenni put the plate of freshly baked cookies in front of her dad and then told him what happened.

Oddly, he was OK with his ex wife's culinary disaster when he wasn't at home. Go figure.

But more important we all got to meet the unflappable Ben who handled ice, fire, and nuts very nicely. 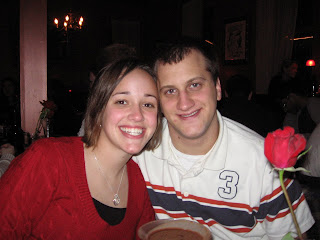 Epilogue: I e-mailed my ex early the next week to offer to replace the fire extinguisher. He said I didn't need to worry about it. I mentioned that it appeared to have been really low anyway and mentioned that the smoke detector (which is hard-wired into the house) wasn't working properly. I pointed out that I had alerted him to these malfunctions and hopefully avoided a disaster. Basically, I saved his life.

That's my story and I'm sticking to it.

I spent the afternoon with some good friends, one of whom works for a certain large communications company. I won't say the company's name, but will say that apparently it has been going through some sort of identity crisis. It keeps changing its name. On the other hand, the frequent name changes could be attempts to avoid creditors, or maybe its ducking alimony payments to former spouses.

Anyway, one of its subsidiaries went through its own name change this weekend. This was an event so huge that Stephen Colbert had to explain it for us.

I received a package in the mail earlier this week. The return address said "Idiot Son-In-Law."

He had found Meghan's present that we all thought he had lost. It was found on top of a filing cabinet in his office.

I told him to quit beating up on himself; we'll do that for him, especially at future Christmases. "Remember the year that Tim lost Meghan's present?"
Posted by DonnaJo at 9:29 PM 3 comments: