Family traditions. One of ours is that every year for Christmas, my dad asks for a trolling motor. He has been asking for one every year for about 40 years. And please keep in mind he's had two of them during that time.

Our family has a new one now, thanks to my son-in-law. "Wii is the new trolling motor."

While Jenni and I took Mom shopping yesterday afternoon, Tim went over to their house with his new Nintendo Wii (courtesy of my ex for Jenni and Tim for Christmas). When we left the mall, I called to tell "the boys" to meet us for dinner. Dad sounded slightly out of breath and I asked him if they'd had a chance to play Wii. Dad said they had and then added, "You gonna buy me one instead of a trolling motor?"

The trolling motor would have been cheaper.

Addendum: Trolling Motor
Posted by DonnaJo at 8:25 AM 4 comments:

The Saturday after Thanksgiving, I went with Jenni and Tim to Northwest's game against West Texas A & M. 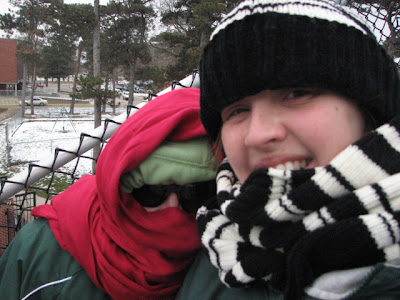 That's me on the left, Jenni on the right. Trust me.

Oh, did I mention that it was frikkin' cold?

Although, that doesn't explain why this young woman was wearing a grass skirt. 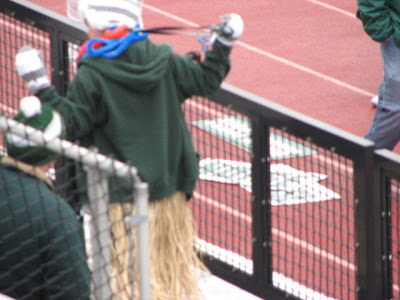 Jenni said the students had held a pep rally the night before.

We were very thankful for the space heater in Tim's office where we warmed our tootsies at half-time. 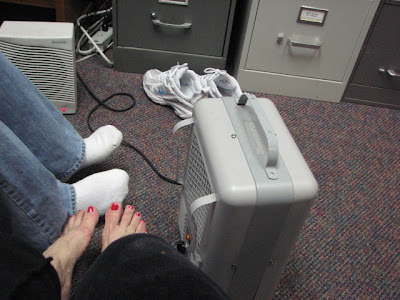 The kicker for West Texas kicked BAREFOOT. Did I mention it was cold?

The following week, Northwest traveled to Chadron State in Nebraska where they dealt with snow..

Prior to last night's game against Grand Valley, 5 inches of snow had to be removed from the field and the stands. Then a freezing rain fell during the game. In the last minutes of the game, with the score 34-16, Grand Valley's coach called a time out, crossed the field and advised Northwest's coach that he was going to let the clock run out in hopes of preventing injuries.


Let's hope the weather is better in Florence next weekend.

Oh wait. The Bearcats do well in bad weather.

And by the way, i 2005 and 2006, the Bearcats lost to Grand Valley in the Championship Game in Florence. So last night's win at home was very sweet for the Bearcats.
Posted by DonnaJo at 12:28 PM 7 comments:

..... I need to update this. And I do plan on cleaning out the blog closet soon and post pictures from Sacramento, San Francisco and Niagara Falls (both trips); but first, I need your help with this: