No, just my life.

I got up at 5:30 this morning and was in to work by 6:30 so I could finish some stuff that popped up at the end of the day yesterday and with it being a holiday weekend and then having to be in Sacramento next week, I had to do it and I was supposed to have breakfast with my parents and get my hair done and it was in REALLY bad shape with roots showing and looking all scraggly and crappy but more and more stuff had to get done and there was no airconditioning at the office even though security said the AC was working but what do they know because they were sitting in their airconditioned lobby telling us on the 34th floor who were sweating like pigs that the airconditioning was actually working and I beg to differ with them but I had too much to do to argue with them and I changed breakfast with the parents to lunch and I changed my hair appointment to the afternoon JUST TWO AND ONE HALF HOURS BEFORE MY FLIGHT oh my gosh am I dumb or what.


So I got out of work and drove to my parents to have lunch with them and oh heavens but they seemed to have taken their slow-poke pills today or was it just because I was in a hurry but after greeting me dad sat down and started to chat as I'm at the door scratching and sniffing like a puppy wanting to go out saying come on let's go to lunch we're burning daylight and dad said the dining room doesn't open until noon so instead we go to a nearby restaurant in separate cars so I can leave from there and not waste time so we race to the restaurant and by we I mean me because I swear dad must have have the emergency brake on the whole way and then they finally arrived and were half way across the parking lot and dad turned around to go back to the car and I was watching that thinking NOOOOOOOOOOOOOOOOOOOOOOOOOOOOOOOOOOOOOO.

Seriously, what is WITH those guys?!?!

-- and I checked my watch and OH MY GOSH Kathy was picking me up in one hour to take me to the hair salon and I had to go home and pack and finish laundry and all kinds of other stuff I had wanted to do that morning but nooooooooooo I couldn't because I had to go to work because some dumb and stupid attorney (on the other side) just had to file some dumb and stupid stuff that made me have to work to get ready for the next week and so I raced home but stopped first to get cash at the ATM and nooooooooooo I didn't have my debit card oh my gosh did I leave it at the Ritz last night (I will blog about Friday Night at the Ritz later) and panic panic panic I'm leaving town and I don't have my debit card and I wasted time at the ATM and OH! I used a different purse last night ant the card is in it ok don't panic just go home and pack.

So I run around the house and throw clothes in the general direction of my suitcase and I don't even want to hear anything from anyone about how I could have stayed home last night and done laundry and packed like goody two shoes Jerry did last night before leaving for Denver today instead of going to the Ritz and just shut up because hey I wanted a life for one night ok fine and now I'm paying for it and maybe a tornado will hit my house while I'm gone and will clean it and I was thisclose to cancelling my hair appointment so I could fold laundry dust and finish the dishes but HEY no one is going to see the house for the next three weeks except Judy and Kathy who have keys if Kathy remembers to get them made and remembers that there's a bag of garbage for her to pick up hint hint because Monday is my garbage day and that's a holiday and her day is Tuesday or something but anyway what was I saying oh yeah no one is going to see the house for the next three weeks but they sure will be seeing me and my hair in bad need of work so I left.

Kathy picked me up and we raced to the salon and she dropped off me and my luggage and ouch that one is heavy and Carla did my hair and for SOME REASON I decided what the heck let's go lighter with the highights and oh my i'm blonde ok not quite blonde but wow it's lighter and the cab came and damn it's the biggoted driver I had last week and when he found out I was going to pay by debit card he wanted to drive by a bank so I could get cash (WTF?!?!?!) and I said they had one at the airport and we got there, I got his money (which cut into his tipbytheway) got checked in and that suitcase that landed on my toe is 7 pounds over and now has a tag on it that says "OVERWEIGHT 51 - 100 lbs" so obviously Nicole Richie works for Southwest if they consider 51 - 100 lbs to be overweight and I go through security and there's a family of about 15 ahead of us and 4 of them are in wheelchairs and instead of having two they have us all in the same line and I keep thinking that's a lot of people one family to be in wheelchairs my gosh was there an accident and they notice me fidgeting and ask me when my flight leaves and I said it's boarding now and they let me go ahead except I'm behind some of the girls in that family who are having their bags checked because security thinks that a family of people in wheelchairs might have nefarious things in their luggage disguised as medical supplies but I make it and I get on the plane just as Meghan calls and wants to chat but I can't because the attendant is asking me to hang up and Meghan finds out I'm going to see her sister and not her and she gets huffy on me (seriously) and then we take off.

And I'm in the airport in Kansas City and I'm waiting for Jenni and Tim's flight and a guy next to me asks me to watch his son while he goes to the bathroom and he's been gone for like 20 nminutes and the son who is like 9 asks me what time it is and says their flight leaves in 15 minutes but says his dad usually takes a long time in the bathroom and I asked if he took a newspaper with him and the kid laughed and the dad returned and the kid said hey dad did you take a newspaper with you and the dad said no why and the kid ratted me out.

And Jenni and Tim's flight is delayed and they won't get here until 9:30.

UPDATE: Tim served as the Official Graduation Photographer, and did a most excellent job. 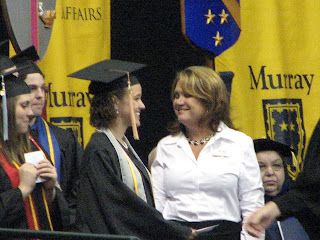 I ask you, does she look happy? 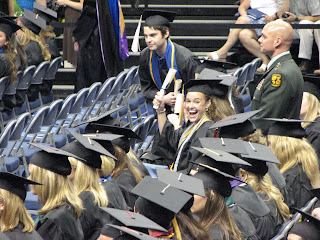 Now, this photo has caused some controversy in the family. The gentleman looking on in the background is Meghan's dad. This photo was just a coincidence; he really does like Ben and he really wasn't glaring. 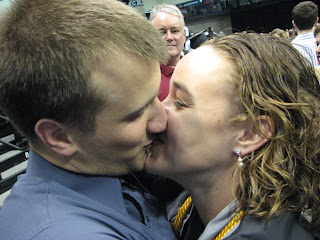 The ASA girls; Three Meghans and an Amanda. 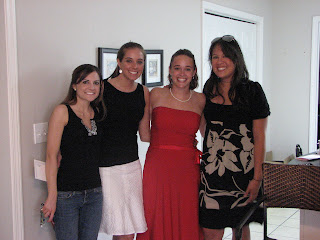 Most of the family; my sister and brother-in-law had already left. 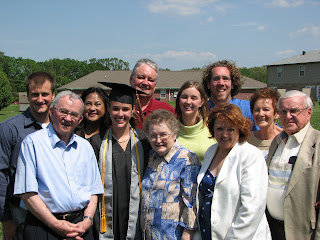 Before dinner, we had to get in some goofy pictures on campus. 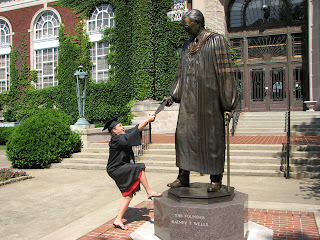 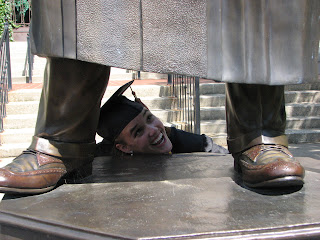 But this wasn't one of the goofy ones. 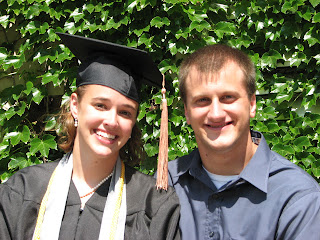 I had to make sure Jenni didn't think I was playing favorites. 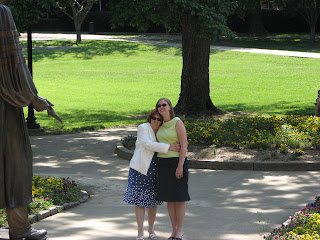 The family went for a graduation dinner at Patti's 1880 Settlement. (Good food). We were in the "Doll Room". Dolls were hanging all over the place. 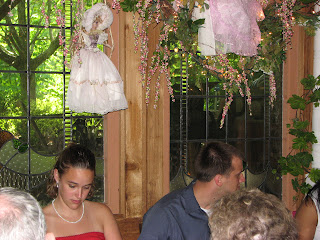 Afterwards, we walked around the "settlement", where I got a shot of Meghan's dad doing something I thought I should save for posterity, because you don't see it much anymore. Children, he's doing what we used to call "changing the film." 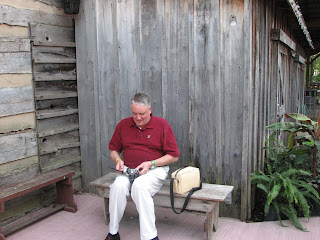 Gaggles of kids in Prom gear were there as well. Meghan's paternal grandpa, Ed, offered to take some pictures, getting some good thigh shots. Tim served as camera caddy. 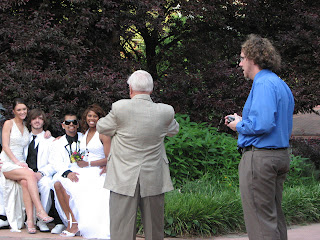 After this picture was taken, my dad walked up to Ed and shook his hand, congratulating him for thinking of that idea.
The grandparents. 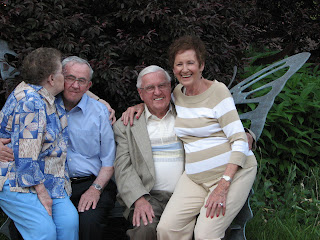 We asked Dad and Ed what they were looking at. They looked at each other, then Ed said, I don't remember. Dad said, "That's our story and we're sticking to it." 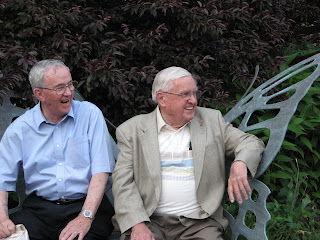 After dinner, the kids went to the Marina where they did some more of that kissing stuff. 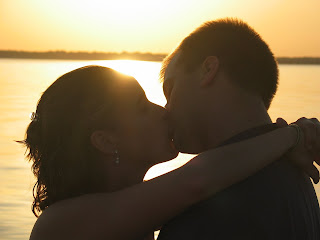 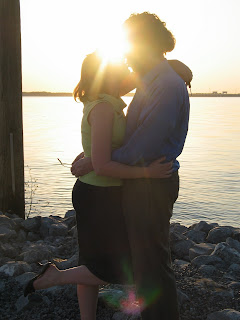 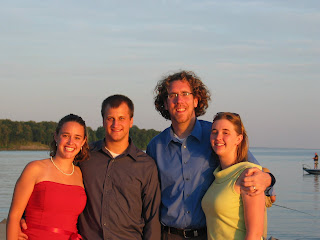